Due to unforeseen consequences, I no longer have my Cowon iAudio X5. I won't go into details but lets say I was still happy with it...

Now that I needed a new PMP(Portable Music Player) and I was displeased with Cowon's new range. Not because they may sound bad but simple becase most of them are touch interface. Whats that I hear you ask? You don't like touch UI!!!

Yes, I hate it on a PMP device. For me I like to have something I can operate in my bag or pocket with one hand and with out looking at the damm thing. Buttons and knobs are a better choice for me.

The biggest thing I look for in a PMP is sound quality and can it play something other then MP3. Ogg Vorbis is such a nicer , and more source open container format. Anyway....

This is when I saw a small Chinese company called Fiio, they make a lot of portable headphone amps and now a PMP. Lets get one thing out in the open, Fiio is not making cheep knock off/fake crap products. The owner is very critical on quality control and build. Fiio's aim is to produce good products at a good price, not be the cheapest or the most expensive, but just good value!

I was lucky, living in HK I was able to get the x3 Fiio's new PMP months before most other western countries. Lets take a look at the tech specs:

You can find the full specs and frequency responce charts hear

I assume by now that your thinking this won't be cheep... I got mine for under $200USD. How can Fiio keep the cost down? Simple. A custom UI written in house and a PMP that has one function. It plays back your music, no you can't watch video's or surf the web or do anything but play a song. Got it?

Time to take a look at the X3. The box also is very basic.

In order to help people spot a fake Fiio x3 , each box has a scratch off number on the bottom. You can enter this number on the Fiio web site and it will tell you if its genuine, fake or the number has already been checked.

You can see I've scratched mine off , just above the serial number.

Inside the box you will find the x3, a USB cable, a case for the x3, extra screen protectors and the 3.5mm coaxial to RCA cable.

I don't really like the case, apparently Fiio have a leather case coming later on.

The player it self looks quite basic. Six main buttons and a screen. Not much to it!

One thing you will notice when you pick up the x3 is that it is solid and well constructed, this is made to last.

Another thing about some touch UI PMP's is that they always come off hold when they are in your pocket. The x3 has a very stiff physical hold button.

On the bottom of the player you will find the USB port and the Line out jack.

The line out is gold plated.

On the top of the player you will find the headphone and coaxial jack and a small pin hole reset button.

Once again both jacks are gold plated.

On the opposit side to the hold switch you will find the micro SD card slot.

Once you insert the SD card it sits flush with the body of the x3, it won't get caught on anything.

To turn the x3 on, hold the "OK" button and ensure the hold switch is not ON. Otherwise the player will shutdown.

The menu's are quite basic and easy to navigate. The x3 supports gapless playback on some formats and also has a database that you can index your songs into. I personally don't.

When you select a song to play you will get some basic information about the song. If you have album art of lyrics you can display them when the song plays. Once again I don't as the player is stuffed in my bag or pocket.

If you are anything like me, by now your dying to know what it looks like inside.

Hear is a nice shot of the top of PCB. 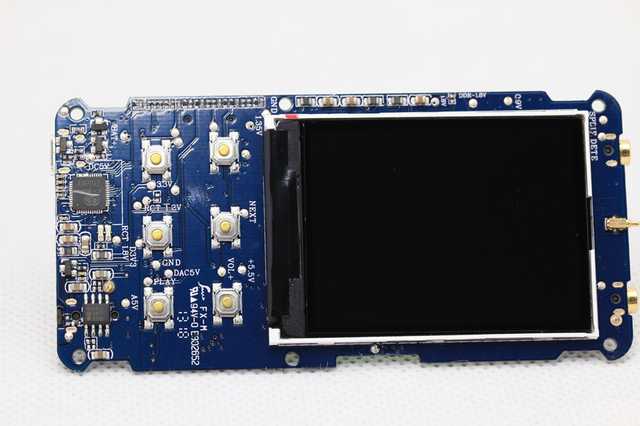 hear you can see the six buttons and the LCD.

On the more interesting side you can see a lot more. 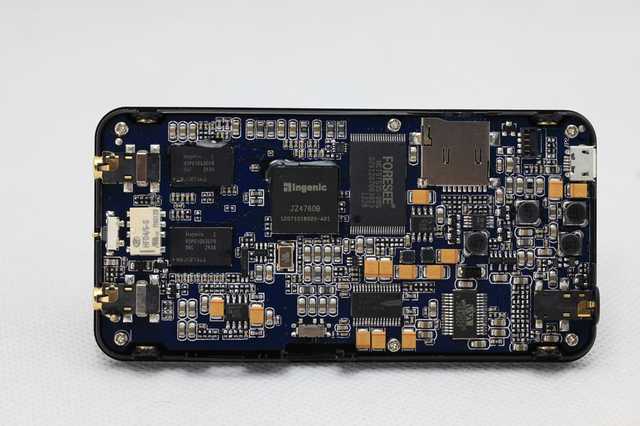 Hear you can see the Ingenic jz4760B ARM cpu. It runs at 600mhz and is low wattage. Perfect for the x3. To the left of that you can see the two Hynix memory chips that make up the 8gb onboard storage. Directly under the memory chips is the AD8397. The big chip to right of the Ingenic is the Forsee NCTSTS35-08G, I think it handles the SD card read/write functions, I am not 100% sure on that.Under the CD card slot right near the edge of the PCD is the WM8740.

As you can see the x3 is very well built and built with very good components.

I am not going to talk to much about the sound, aside from the fact I feel it sounds very good. I can't fault it, maybe a little warm sounding but I quite personally enjoy the x3's sound its also very detailed and transparent. By all means do demo a x3 and form your own opinion.

I will however warn you. The UI is very basic and is still under development. For me I have not had any issues. I select an album and hit play put the unit in my pocket. For that it works well. If you how ever are expecting a UI as good as Rockbox or your iPod your going to be let down. You how ever won't be let down by the amazing sound that comes out of this device! How ever it is a lot better sounding them my Cowon x5 ever was.

Lastly, I wish to make it quite clear I brought the x3 myself. In no way did Fiio sponsor my review.